“The Influence”, opera prima of film director Denis Rovira premieres on June 21 in Spain. It is produced by Nadie Es Perfecto and Recording Movies with the participation of RTVE. David Ciurana is co-producer of the film for Recording Movies. Sony Pictures distributes the film in Spain.

The influence is an adaptation of Ramsey Campbell’s novel. Starring Emma Suarez, Manuela Vellés, Maggie Civantos and Alain Hernandez is a story of suspense and terror about the weight of family ties,

In “The Influence”, Alicia returns to the sinister mansion from which she fled as a child – a home that has never harbored happy childhoods – now transformed into a young family mother. Accompanied by her husband and nine-year-old daughter, Nora, Alicia seeks to rebuild her life while being forced to confront a past she believed buried and a body that resists death: Victoria’s, the family’s possessive matriarch, who has fallen into a deep coma and survives connected to a machine, and for which little Nora feels an unhealthy fascination.

Here you can see The Influence commercial poster. 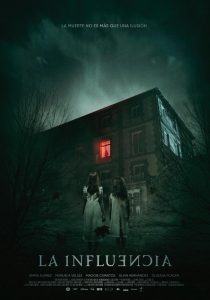 Here you can watch the trailer.