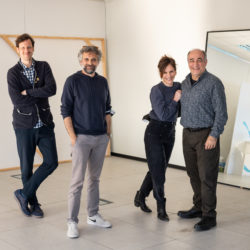 We have begun shooting our next feature film Toscana, written and directed by Pau Dura (Formentera Lady) and stared by Francesc Orella (Merlí), Edu Soto (El Pueblo), Malena Alterio (Vergüenza), and the director himself. Toscana is a comedy that tells the disastrous kidnapping of a culinary critic of an Italian restaurant. According the director “the Read more about Pau Dura’s Toscana Starts Shooting this Month[…]