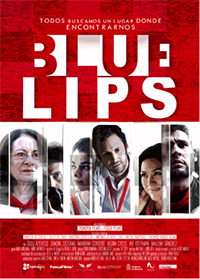 “Six characters, six cities, six directors, San Fermín 2012” is the slogan of  ‘Blue Lips’, a film directed by six directors from six completely different places that follows the story of six characters who, due to various reasons, end up traveling to Pamplona during the San Fermín Festival, where their lives will cross, discovering that all of them have something in common.
They are Malena, a young Argentinean who is disabled; Vitorio, an Italian photographer with a tragic past; Kalani, a Hawaiian dancer; Guido, an ex football player in Brazil; Oliver, a successful American journalist; and Sagrario, a Pamplona resident in Madrid who will return to his hometown to decide what to do with the remains of her deceased husband.”