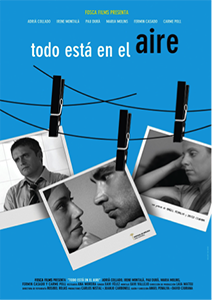 «Nacho is a boy in his thirties, in love with his girlfriend Ana and he is riding his own business. But it is shot to shit when Ana leaves him for another guy overnight. Nacho is comforted with Jose, his best friend, who has decided to have his first child with his wife, Miriam, and stop once and for all his gay lover Alex. One year later, everything seems to have changed, or not, because all is still in the air. The first film MUMBLECORE of Spanish cinema. Starred by Adrià Collado, Irene Montalà, Pau Durà, Maria Molins, Fermín Casado and Carme Poll.»